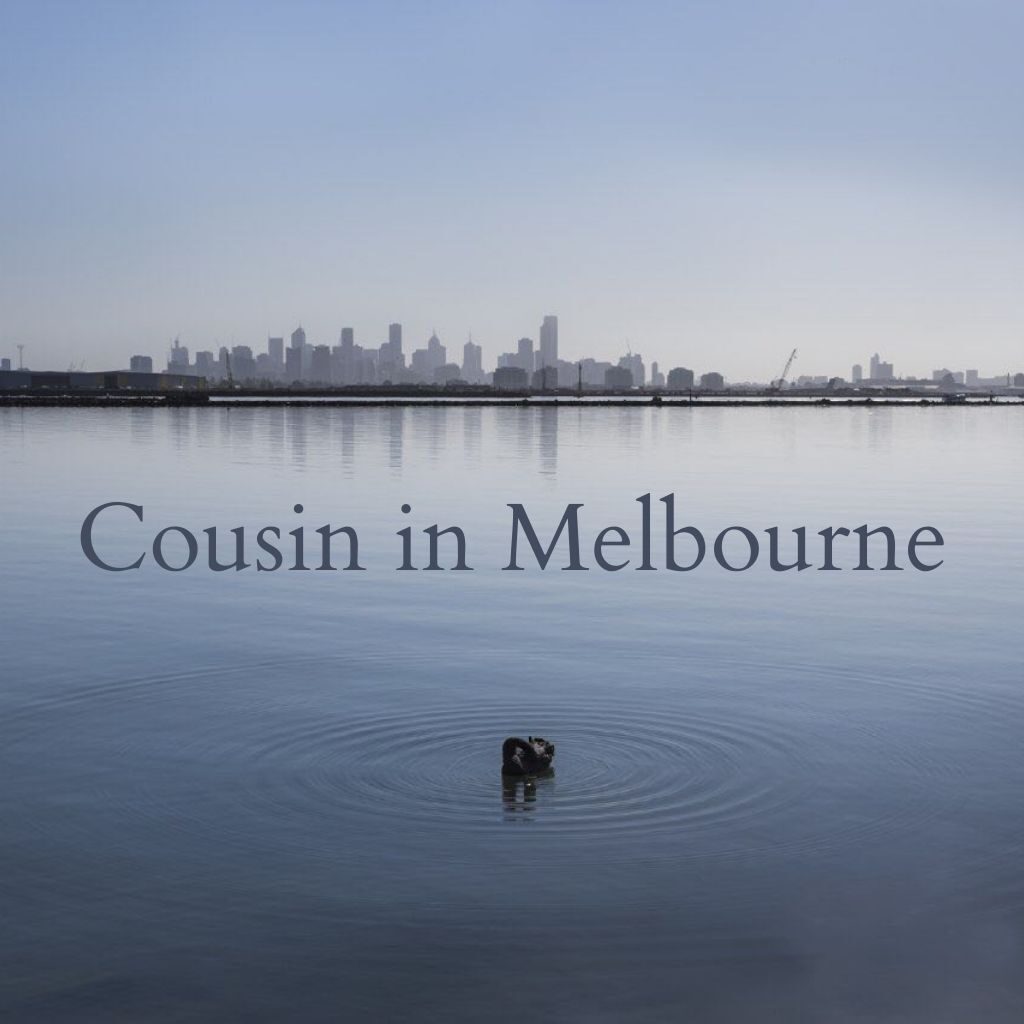 In 2000, I handed Gilbert an envelope addressed to Cousin.  He took over the envelope, stared at the name of the addressee and chuckled, “That’s cute!”

I have since addressed my cousin in Melbourne as Cousin.

In 2015, I told him I had quit my job.  His first reaction was to blow trumpets and clap his hands, saying, “Congrats!”  He was beyond supportive.  It was the same kind of support and encouragement he showed me in 2014, though at that time, I was unsure whether to believe him or not.  No one had been so supportive to me.

His reaction to my news in 2015 was a stark contrast to the reactions of my friends, colleagues, and family in Canada who at best were silent, and at worst, looked down on me either with pity or disapproval.  Naturally, I fled to Australia, for warmth and comfort.  I entered the continent again with the same tourist visa from a year ago.  This time, in Melbourne, I saw a calmer Cousin.  I was surprised.  The person I saw in 2014 wasn’t there anymore.  But I loved the time we spent together, him playing host to me, taking me around, treating me to nice restaurants.

Later in the same year when I travelled to Kosovo and discovered a list of unrecognized charges on my credit card, I panicked.  He stood by me, again giving me support and comfort.

Once, we had a discussion.  I told him I wished to see him together with all my other cousins, like a family reunion.  His response surprised and puzzled me.  He would prefer that I saw him in Melbourne, not in our homeland, because he could not be himself among our relatives.  For years, I couldn’t understand the psychological meaning and feeling behind that statement.  But now, I can.  Because I have realized that I cannot be myself among our relatives.  Furthermore, I will be completely reliant on them if I go back to visit them.  For many reasons:  I cannot drive there, I don’t have a sense of direction there, GPS and maps are not reliable there, I have no friends there, I don’t speak the language there.  I practically do not belong there. To go back, though I would be warmly welcomed and generously provided for, means to be a captive in my own tribe—no freedom.  I have considered staying in a hotel, hiring a driver, etc., but that gesture would most likely be seen as an insult to my relatives, not an amicable way to visit my relatives.

To be able to be my authentic self, first and foremost, I must be able to stand on my own two feet.  Only then will I have the freedom to assert myself without the need to compromise.

But Cousin’s situation isn’t exactly the same as mine. Though the reasons may be different, our fundamental psychological experience is the same.  We are people who cannot be accepted by our family, our home, our birthplace.  I see the same psychological imprint in our paternal grandparents, and many of their descendants, because we were born stateless.  Our birthplace did not acknowledge us as citizens, in the same way, our family members do not accept us as who we truly are.

Last year, I received several gifts from my cousin.  A couple of my friends commented, “You guys seem pretty close.”

In the Christmas card I sent him, I wrote, “I feel that we are not very close …  But I’m okay with us being not so close.”  I appreciate and enjoy his gifts, and I know that our families show their kinship primarily in the form of material comfort.  And I am lucky to say that I have been amply provided for by my relatives.  But there is no emotional nourishment, only emotional abuse.

I used to think that me and Cousin were close.  Compared to the other cousins, I felt closest to him.  But compared to some of my friends, we’re not close.  I felt a glass wall between us.  I had only recently come to notice the wall.  Not that it was newly installed, but that I had only recently been able to perceive it.  My new awareness was the result of my healing on human connection.

Later, with greater clarity, I saw that he wasn’t the only one who erected a wall, I did too.  I could not open my heart fully to allow for a core connection, to listen, to understand.  And when I tried to listen, I noticed that he had an unassuming voice, almost as if he did not want to be heard.  Truly, I was not accustomed to that kind of communication style.  I grew up in an environment where aggression and repetition were used in communication.

With more and more healing on human relationship, I learn to hold more meaningful and nourishing relationships. As a result, I come to understand Cousin more, and to hear him more.