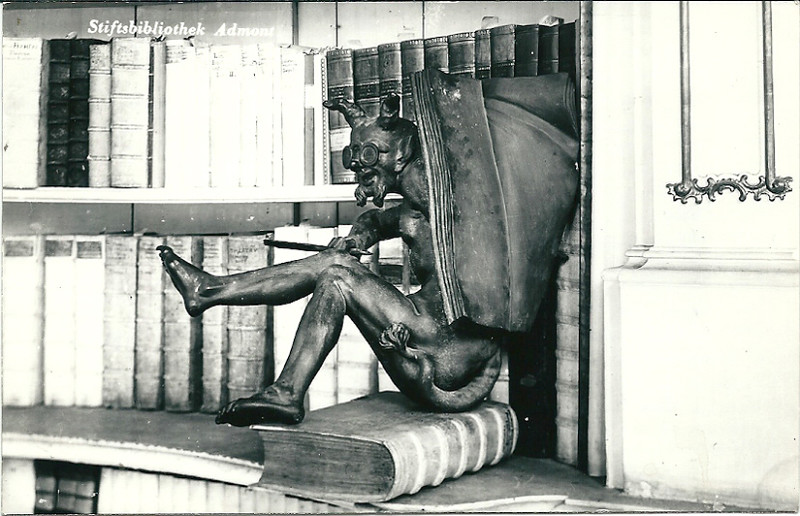 The monasteries have always been not only a religious place but also a place of learning. Admont fully cared about the education of local children and youth. The monastery has  three museums.

The first of them is the Museum of natural history.

Just it is a classic. It is very small. I t is just a baby compared to our Petersburg Zoological Museum. But the collection is wonderful.

…and I with birds

The colors are most unusual.

The ladies deer are horned too )))

The monks a little joked  in this Museum. This lion roars loudly when someone is  approaching to the exhibits.

After a devastating fire in 1865  the monastery and museum was restored. The Father Gabriel Strobl (1866-1910) devoted to the museum 44 years of his life. He devoted  himself to the botany  12 years and the following 32 years – entomology. He created a collection of 252000 instances of insects. Almost everything that we now see in the Museum is the work of Strobl. What he could not himself produce in his expeditions he is exchanged or bought. Еру сcollection of Strobl it’s something!!!

In one of the rooms has 243 varieties of Styrian apples. All made of wax by his father Constantine Kepler ((1778-1864). Some varieties of the now non-existent.

In General, the Museum is very worthy.

Another museum is the Kunsthistorisches Museum. It presents the exhibits from the Romanesque period to the Rococo.  It is the paintings, sculptures, textiles.

The most valuable exhibits are the embroidery made by famous master Brother Benno Haan (1631-1720).

The view from the stairs at the glass transition from floor to floor.

The third museum is the museum of Modern Art. I understand that his exposition periodically updated. Here the authors are well frolicked. I like that most of the work has humor  in contrast the works in Vienna’s MUMOK. Here is an example of the use of spoons-forks not for its intended purpose.

The elegant chandelier made of plastic bottles.

I stumbled in the hallway on the currently fashionable artist Gironcoli.

And he was also spotted in the yard.

I can’t say that his work has impressed me. I retarded person.

And the area around the monastery is also quite good. There are a lot of flowers.

Here I asked   Stas to take a photo of me : Useless! Either he couldn’t fit the view in the frame, or does not fit the head or all remaining  body parts!

And it is a wonderful place to explore the local pond. You can see water lilies, ducks, swans, beautiful views of the mountains and the monastery. It is a very beautiful place.

From the monastery went to the nearby castle Strechau. The castle is the second largest in Styria. Inside should be an interesting museum.

But the first time we didn’t find the way and we had to go to the track countless kilometers. In general, when we arrived, the castle gates  had been already closed.

The castle is in private ownership. And it closes at 15:00.

With the lock connected a very old legend about an unfaithful lover.

The young girl took her lover to a crusade… And promised the knight that he would remain faithful to him to the grave. But if he does not return from a crusade, she will go to the monastery. Some time passed and she forgot about her promise. She said yes matchmaking to her grandee. They arranged a big wedding. But at the wedding feast with her there was a terrible metamorphosis: her delicate features distorted by a terrible grimace. Instead of the beautiful face  the stunned guests saw the skull. The ground opened under the feet of the unhappy and the demons dragged her to the hell…

The painting by an unknown artist Burgfräulein von Strechau hangs in the museum of Admont. And we made a little picnic on a bench in front of the castle. And we went  home…”

Wishing all the best, Nastya 🍁🍃🌞